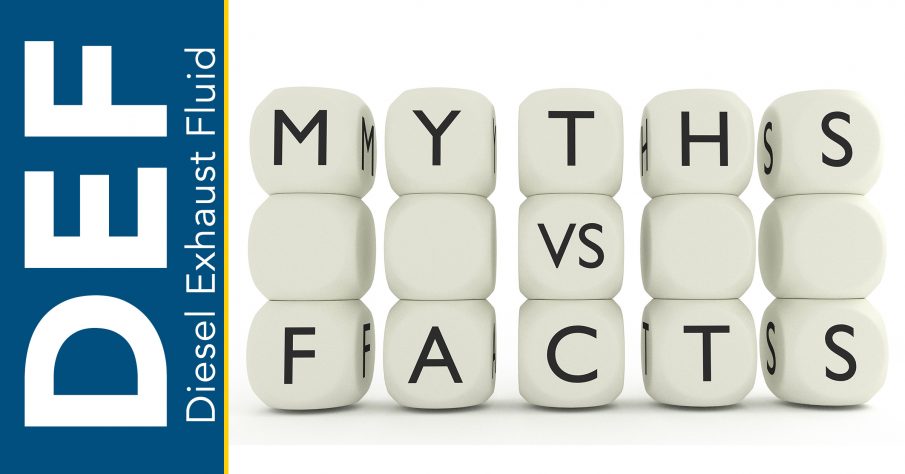 The truth about DEF – it’s not what you think

There is much misinformation floating around about Diesel Exhaust Fluid (DEF). DEF is an additive required by many diesel engines. Its development and use were a significant step forward in the reduction of greenhouse gas emissions. Added to engines with Selective Catalyst Reduction (SCR) technology, DEF will reduce NOx and particulate matter by 90 percent – a significantly low emission level near zero.

If that wasn’t impressive enough, DEF is a non-hazardous, watery solution made up of 32.5 percent urea and 67.5 de-ionized water. “Urea?” you say. “Isn’t that just pee?” Not really. That’s just another one of the pesky myths about DEF that still pervades today. We at NEXGEN DEF want to help set the record straight on DEF. We’ve put together a list of the most common myths about DEF so you can be armed with the facts.

Fact: DEF is a non-toxic, non-hazardous, and non-flammable fluid. It requires no special handling and is not polluting.  It has a natural pH of 9.0 – about the same as common household baking soda. For comparison’s sake, water has a pH of 7.0. DEF is made from urea, a high nitrogen compound most frequently used for fertilizer. It’s readily absorbed by plants, promoting significant growth. Over 90 percent of the world’s urea is allocated for agricultural use. The kind used for auto grade-level products is even more non-toxic than agricultural grade.

DEF is less toxic than most of the other fluids in your truck, including diesel fuel, engine oil, brake fluid, antifreeze, and windshield washing fluid.

DEF is injected into your vehicle’s exhaust stream, reacting with the Nitrous Oxide (NOx) in the SCR catalyst. The result the NOx and DEF combine to form harmless nitrogen and water – naturally occurring elements in the fresh air we breathe. From an environmental (and safe working conditions) standpoint, this is preferable to NOx which is the cause of acid rain, smog and the rise in greenhouse gas levels.

Fact: Has someone told you urea is animal urine? Or equivalent to human urine? Not so much. Since the 1930s, synthetic urea has been produced by synthesizing synthetic ammonia and carbon dioxide in a heated, sealed process.

The automotive-grade urea used to manufacture DEF meets the strict production and emissions standards of the American Petroleum Institute.

DEF is hard to use: FALSE

Fact: DEF is a readily available liquid from larger, commercial filling stations, or off the shelf at vehicle parts and lubricant suppliers. Filling the DEF tank is as easy and as accessible as topping off your windshield wiper fluid.

You don’t need to refill your DEF supply every time you fill your gas tank. Depending on how much you’re hauling, the rate of DEF use is about 2.5 gallons for 800 or so miles of travel – that’s a refill of about five to 10 times per year.

Fact: Urea does not become toxic at any temperature. The chemical makeup of DEF is not affected by freezing and thawing. Even at high temperatures (which are avoided by the cooling and temperature stabilizing design of DEF engines), DEF will still meet ISO specifications of less than 0. 2 percent ammonia for at least 35 days. Interestingly, at that temperature, it would take over two years to reach the ammonia levels of household ammonia. In short, DEF is highly stable.

Fact: A DEF vehicle gets similar fuel mileage as those with other emissions-reducing technologies.

Since emissions are regulated, and you’re required to meet certain standards, you may as well choose the CSR/DEF vehicle. You’ll experience better fuel economy and increased power. Less wear and tear on your engine results in lower maintenance costs overall.

Want to learn more about DEF, and it’s benefits for your engine and the planet? Check out our post The diesel engine’s evolution to clean-burning DEF.

NEXGEN is the largest provider of DEF in the Northwest. We’ve even grown to add another manufacturing plant in SeaTac capable of producing a million gallons of DEF per month.  Through the SeaTac location, we’re now providing NEXGEN DEF to Seattle and western Canada.

Our latest step has been to bring our product to the pump by adding NEXGEN DEF dispensers to an increasing number of Cardlocks throughout Oregon, making it easier than ever to access the latest in diesel system innovations.

To find out more about using NEXGEN DEF for your fleets, Call Us or visit our DEF page